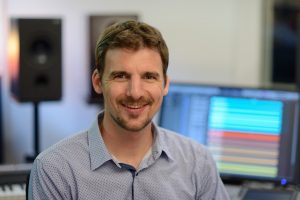 Born in Germany, European at heart, Daniel Deboy is co-founder of DELTA Soundworks. He is not only an expert in spatial audio, but also adept at leading interdisciplinary teams. Currently, he focusses on integrating sound for interactive XR experiences and mixing sound for immersive media. Loving nature and its spaces, he strives for convincing soundscapes in his work. One good example is “Blautopf VR”, which was nominated for best sound and won the innovation prize at the German developer awards in 2019.

Prior to DELTA Soundworks, he worked at CERN, the European Laboratory for Particle Physics, where he enjoyed collaborating in an international environment. He was responsible for developing an acoustic analysis system for beam induced damage on particle accelerators… or in other words, trying to catch the sound of that goddamn particle.

Daniel received a diploma in audio engineering from Graz University of Technology and University of Music, his diploma thesis earned the student award of the German Acoustical Society.